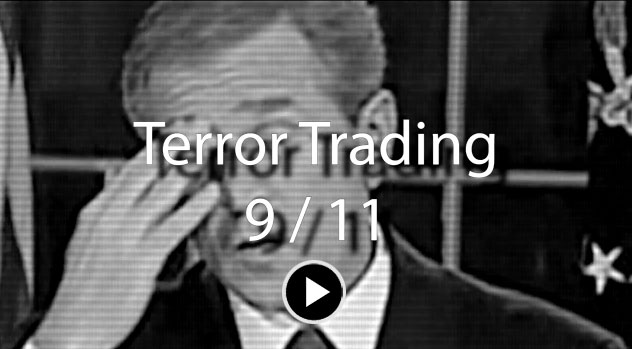 Is there any truth in the allegations that informed circles made substantial profits in the financial markets in connection to the terror attacks of September 11, 2001, on the United States?

Arguably, the best place to start is by examining put options, which occurred around Tuesday, September 11, 2001, to an abnormal extent, and at the beginning via software that played a

PROMIS is a software program that seems to be fitted with almost « magical » abilities. Furthermore, it is the subject of a decades-long dispute between its inventor, Bill Hamilton, and various people/institutions associated with intelligence agencies, military and security consultancy firms. [1]

One of the « magical » capabilities of PROMIS, one has to assume, is that it is equipped with artificial intelligence and was apparently from the outset “able to simultaneously read and integrate any number of different computer programs or databases, regardless of the language in which the original programs had been written or the operating systems and platforms on which that database was then currently installed. » [2]

And then it becomes really interesting:

What would you do if you possessed software that could think, understand every major language in the world, that provided peep-holes into everyone else’s computer « dressing rooms », that could insert data into computers without people’s knowledge, that could fill in blanks beyond human reasoning, and also predict what people do – before they did it? You would probably use it, wouldn’t you? [3]

Granted, these capabilities sound hardly believable. In fact, the whole story of PROMIS, which Mike Ruppert develops in the course of his book Crossing the Rubicon in all its bizarre facets and turns, seems as if someone had developed a novel in the style of Philip K Dick and William Gibson. However, what Ruppert has collected about PROMIS is based on reputable sources as well as on results of personal investigations, which await a jury to take a first critical look at.

This seems all the more urgent if you add to the PROMIS capabilities « that it was a given that PROMIS was used for a wide variety of purposes by intelligence agencies, including the real-time monitoring of stock transactions on all the world´s major financial markets ». [4]

We are therefore dealing with a software that
a) Infiltrates computer and communication systems without being noticed.
b) Can manipulate data.
c) Is capable to track the global stock market trade in real time.

Point c is relevant to all that happened in connection with the never completely cleared up transactions that occurred just before September 11, [5] and of which the former chairman of the Deutsche Bundesbank Ernst Weltke said « could not have been planned and carried out without a certain knowledge ». [6]

I specifically asked financial journalist Max Keiser, who for years had worked on Wall Street as a stock and options trader, about the put option trades. Keiser pointed out in this context that he « had spoken with many brokers in the towers of the World Trade Center around that time. I heard firsthand about the airline put trade from brokers at Cantor Fitzgerald days before. » He then talked with me about an explosive issue, on which Ruppert elaborated in detail in Crossing the Rubicon.

Max Keiser: There are many aspects concerning these option purchases that have not been disclosed yet. I also worked at Alex Brown & Sons (ABS). Deutsche Bank bought Alex Brown & Sons in 1999. When the attacks occurred, ABS was owned by Deutsche Bank. An important person at ABS was Buzzy Krongard. I have met him several times at the offices in Baltimore. Krongard had transferred to become executive director at the CIA. The option purchases, in which ABS was involved, occurred in the offices of ABS in Baltimore. The noise which occurred between Baltimore, New York City and Langley was interesting, as you can imagine, to say the least.

Under consideration here is the fact that Alex Brown, a subsidiary of Deutsche Bank (where many of the alleged 9/11 hijackers handled their banking transactions – for example Mohammed Atta) traded massive put options purchases on United Airlines Company UAL through the Chicago Board Option Exchange (CBOE) – « to the embarrassment of investigators », as British newspaper The Independent reported. [7]

On September 12, the chairman of the board of Deutsche Bank Alex Brown, Mayo A Shattuck III, suddenly and quietly renounced his post, although he still had a three-year contract with an annual salary of several million US dollars. One could perceive that as somehow strange.

A few weeks later, the press spokesperson of the Central Intelligence Agency (CIA) at that time, Tom Crispell, declined all comments, when he was contacted for a report for Ruppert´s website From the Wilderness, and had being asked « whether the Treasury Department or FBI [Federal Bureau of Investigation] had questioned CIA executive director and former Deutsche Bank-Alex Brown CEO [chief executive officer], A B ‘Buzzy’ Krongard, about CIA monitoring of financial markets using PROMIS and his former position as overseer of Brown’s ‘private client’ relations. » [8]

With his background as a former options trader, Keiser explained an important issue to me in that regard.

Max Keiser: Put options are, if they are employed in a speculative trade, basically bets that stock prices will drop abruptly. The purchaser, who enters a time-specific contract with a seller, does not have to own the stock at the time when the contract is purchased.

Related to the issue of insider trading via (put or call) options there is also a noteworthy definition by the Swiss economists Remo Crameri, Marc Chesney and Loriano Mancini, notably that an option trade may be « identified as informed » – but is not yet (legally) proven – « when it is characterized by an unusual large increment in open interest and volume, induces large gains, and is not hedged in the stock market ». [10]

Open interest describes contracts which have not been settled (been exercised) by the end of the trading session, but are still open. Not hedged in the stock market means that the buyer of a (put or call) option holds no shares of the underlying asset, by which he might be able to mitigate or compensate losses if his trade doesn’t work out, or phrased differently: one does not hedge, because it is unnecessary, since one knows that the bet is one, pardon, « dead sure thing. » (In this respect it is thus not really a bet, because the result is not uncertain, but a foregone conclusion.)

In this case, the vehicle of the calculation was « ridiculously cheap put options which give the holder the ‘right’ for a period of time to sell certain shares at a price which is far below the current market price – which is a highly risky bet, because you lose money if at maturity the market price is still higher than the price agreed in the option. However, when these shares fell much deeper after the terrorist attacks, these options multiplied their value several hundred times because by now the selling price specified in the option was much higher than the market price. These risky games with short options are a sure indication for investors who knew that within a few days something would happen that would drastically reduce the market price of those shares. » [11]

Software such as PROMIS in turn is used with the precise intent to monitor the stock markets in real time to track price movements that appear suspicious. Therefore, the US intelligence services must have received clear warnings from the singular, never before sighted transactions prior to 9/11.

Of great importance with regard to the track, which should lead to the perpetrators if you were seriously contemplating to go after them, is this:

Max Keiser: The Options Clearing Corporation has a duty to handle the transactions, and does so rather anonymously – whereas the bank that executes the transaction as a broker can determine the identity of both parties.

But that may have hardly ever been the intention of the regulatory authorities when the track led to, amongst others, Alvin Bernard « Buzzy » Krongard, Alex Brown & Sons and the CIA. Ruppert, however, describes this case in Crossing the Rubicon in full length as far as possible. [12]

In addition, there are also ways and means for insiders to veil their tracks. In order to be less obvious, « the insiders could trade small numbers of contracts. These could be traded under multiple accounts to avoid drawing attention to large trading volumes going through one single large account. They could also trade small volumes in each contract but trade more contracts to avoid drawing attention. As open interest increases, non-insiders may detect a perceived signal and increase their trading activity. Insiders can then come back to enter into more transactions based on a seemingly significant trade signal from the market. In this regard, it would be difficult for the CBOE to ferret out the insiders from the non-insiders, because both are trading heavily. » [13]

The matter which needs clarification here is generally judged by Keiser as follows:

Max Keiser: My thought is that many (not all) of those who died on 9/11 were financial mercenaries – and we should feel the same about them as we feel about all mercenaries who get killed. The tragedy is that these companies mixed civilians with mercenaries, and that they were also killed. So have companies on Wall Street used civilians as human shields maybe?

So far, so good. In the same month, however, the San Francisco Chronicle newspaper reported that the SEC took the unprecedented step to deputize hundreds, if not even thousands of key stakeholders in the private sector for their investigation. In a statement that was sent to almost all listed companies in the US, the SEC asked the addressed companies to assign senior staff for the investigation, who would be aware of « the sensitive nature » of the case and could be relied on to « exercise appropriate discretion ». [15]

In essence, it was about controlling information, not about provision and disclosure of facts. Such a course of action involves compromising consequences. Ruppert:

What happens when you deputize someone in a national security or criminal investigation is that you make it illegal for them to disclose publicly what they know. Smart move. In effect, they become government agents and are controlled by government regulations rather than their own conscience. In fact, they can be thrown into jail without a hearing if they talk publicly. I have seen this implied threat time after time with federal investigators, intelligence agents, and even members of United States Congress who are bound so tightly by secrecy oaths and agreements that they are not even able to disclose criminal activities inside the government for fear of incarceration. [16]

Among the reports about suspected insider trading which are mentioned in Crossing the Rubicon/From the Wilderness is a list that was published under the heading « Black Tuesday: The World’s Largest Insider Trading Scam? » by the Israeli Herzliyya International Policy Institute for Counterterrorism on September 21, 2001:

One Response to Insider trading 9/11 … the facts laid bare